So this month I did two races: a 5K and a 10K. With a vacation at the end of the month, my workout schedule was a little messed up. I still tried to do Crossfit twice a week, yoga once a week, 2 short runs, 1 long run and a track practice and then on Fridays I added a BodyPump class which I can only do in the summer when I am off from school. However, on vacation I only ran once.

First race was 1st Street 5K.  It is held Father’s Day weekend at the No Label Brewery. We have done this race every year they have had it.  We love it. Plus it is stroller friendly so my son has been in the race three times. The street course has lots of turns which I like.  It is also in a part of town I never go to so the scenery is different. It is flat and hot but there is shade. The race keeps getting bigger and bigger so the beginning of was crowded but once we turned onto a main street it clears up. I ran it in 26:47 which is about right for me.  That is a 8:37 mile. My husband always takes our son and this year they walked because my husband had an infection in the heart (really rare and weird) and did not have permission for rigorous workouts.  He is fine now and can workout again. Afterwards, we had our camp chairs already set up (in a really shady are) and just drank our free beers and relaxed with friends.  The brewery recently added a playground so I took my son over there to play.

Second race was in Johnson City, TN and called  Run the Tweetsie Half Marathon and 10K.  I ran the 10k because I was on vacation and it was an out and back course but twice for the half. The trail was beautiful.  The race was small and was just 3.1 miles out and then come back in.  There was a gradual uphill the whole back half but I love hills.  Yes my pace slowed, but the last 3 miles went by so fast. The course is on the Tweetsie Trail which is a paved trail, and very much tree-lined the entire time.  There was a part after 2 miles, where there were no trees and you just saw rolling hills of fields and mountains in the background.  It was really pretty. The race directors put on a good race. I ran it in 58:51 which is a 9:28 mile. It rained for some of the race but just a light drizzle.  It was also in the 60s the entire time which was perfect coming from a place where it is in the 80s already at 7 in the morning. My husband did not run it but walked some of the trail and made it into race photos. 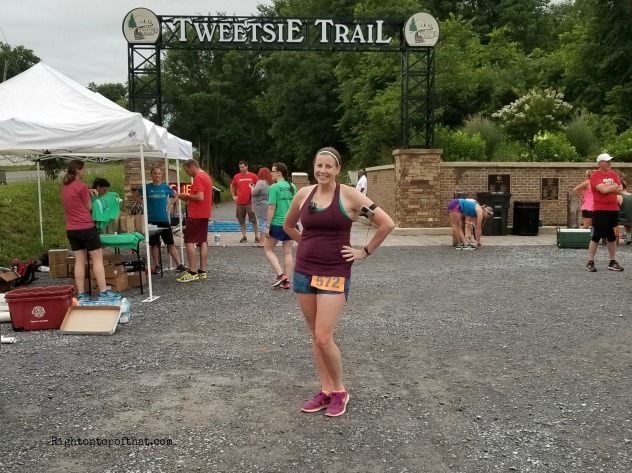