Last Thursday my family of three hopped on an airport and headed to Tennessee for a family vacation. In the past, it has just been my mom, sisters and I but this time we opened it up to the whole family. So my sisters, my mom, my aunt, my cousins and the kids all came.  We had about 18 people there (my family is pretty small, we were only missing 2 people). My son finally got to meet his cousins too.

This was our arrival date. We were staying in Rogersville, TN which is in the middle of nowhere.  The reason we were staying there: we found a canoe/floating place that allowed toddlers.  We also had to stay at a hotel that was dog friendly so Rogersville was our destination.  There is nothing much in the town but we made do.  My family was the only one flying because we live the farthest away. We flew into Nashville and then drove. For lunch we stopped in Knoxville and ate at Smoky Mountain Brewery.  We loved the beers and loved that they had a kids menu and crayons. We also enjoyed the food too.  We ended up buying two 6-mix/match-packs to go. We made it to the hotel at about 2 and my mom, one sister, aunt and uncle were there at about 3:30. Soon others arrived but the last group got in at about 7:50. We ate dinner but a lot of restaurants in town close at 8 or 9.  We did not want fast food.  We ate at a place called O’Henrys which the hotel staff recommended.  I liked it and very kid friendly but my family did not. 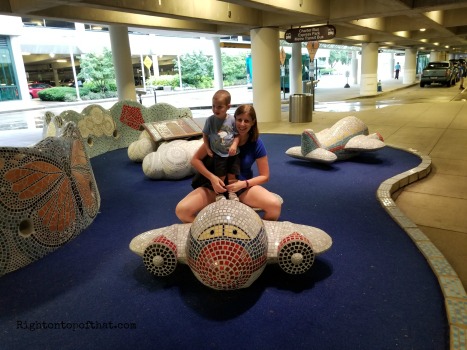 The hotel we stayed at had free breakfast so we all just ate once we woke up.  My son was the youngest at 2 and the oldest of the grandkids is 21.  Most were high school range. The weather looked rainy our whole weekend but we were not going to let that stop us. We had made reservations at River Place on the Clinch to float down the river.  We were going to do the 3 mile route.  We decided to postpone by one hour to give the weather a chance to clear. It ended up raining on us for about 30 minutes and then cleared to be a beautiful day.  We were on the river for about 5 hours.  We packed lunches, played in the water and just relaxed. It was perfect.  The place was very laid back too.

That night, I had to go pick-up a packet for a race I was doing the next day.  Packet pick-up was one hour away in Johnson City at the Yee-Haw Brewery.  Only my family went on this side excursion.  Yee-Haw brewery was an awesome place.  They had old school games like Skee Ball, good beer and a restaurant attached to it called White Duck Taco Shop. Service was fast too.  My husband and I really enjoyed ourselves.  They also had a free concert across the railroad tracks too so we went to that for a little bit. 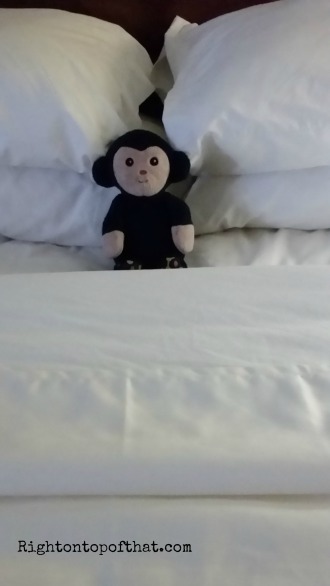 Came back to see the Maid tucked in Monkey

We woke up early to get to my race in Johnson City.  My mom came to my hotel room to watch my little guy.  I did the Tweetsie Trail Half Marathon and 10k.  I decided to only do the 10K as I was on vacation. The race is small but really put together, I will do more of a recap later.  After my race, we made it back to the hotel at about 9:30 and my son was eating in the lobby. My family decided to go hike that day after lunch. We did fast food for lunch which my car ate at Pal’s because we have never heard of that before. We recommend it. We hiked at Warriors Path State Park in Kingsport.  The trail we originally wanted to go on was closed so we did the Devil’s Backbone. We hiked about half mile to a photo-op spot and turned around. That night we went to Rogersville City Park and had a BBQ.

One of my cousins and her family were leaving because they had to work on Monday.  We took some family photos before they left. After they left, my sisters began calling different places and we ended up renting a pontoon boat and wave runner for 6 hours.  The place is called H20 Sports in Dandridge and we were on Lake Douglas.  My family had some much fun boating, playing in the water and playing on the wave runner.  My son loved the boat ride and loved swimming in the water.  It was a great day for it too. We decided to eat a Mexican Grill called Toros before we headed back to Nashville.  Our flight was at 5:30 in the morning and we had a hotel room that night in Nashville.  We left right from the restaurant because it was one hour closer than going back to Rogersville to say goodbye.  It is always hard leaving family though.

One thought on “Family Vacation to East TN”